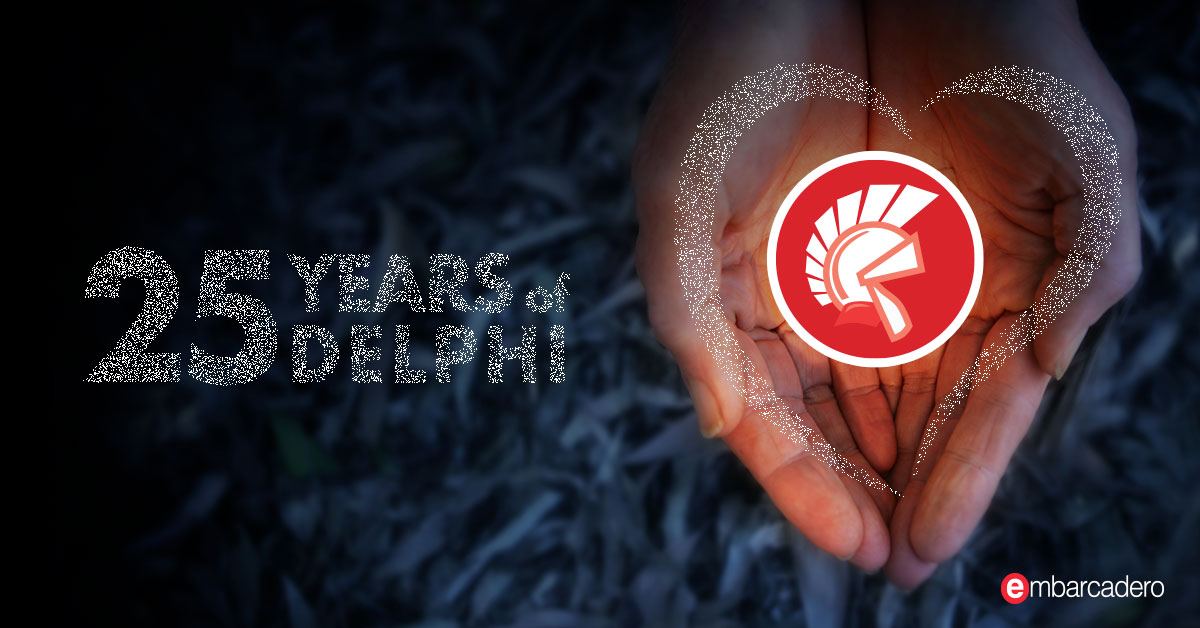 14 February is known to many as Valentine’s Day. But it’s also the birthday of Delphi, the fast, native app development programming language that, in February 2020, is celebrating 25 years of existence.

Delphi is a powerful Object Pascal IDE and component library for Windows 10, Mac, mobile and IoT app development. Developers can use Delphi to quickly and easily create cool cross-platform apps that are natively compiled. Delphi is a single code base that means developers just write once and compile everywhere, so it’s great for productivity.

The VCL framework for Windows and FireMonkey (FMX) visual framework can be used to create intuitive, aesthetic interfaces that look awesome across the various platforms. Plus, using FireDAC’s high-speed direct access, you can connect natively to over twenty databases.

As for the name “Delphi”, it was originally the code name for the project, and the official launch name was going to be AppBuilder, but then Novell released their own product called Visual AppBuilder, so the Delphi name stayed.

What do people say about Delphi?

“Delphi has been the key development tool we have used to create data-driven applications for our business and our suppliers. It has been critical to the success of our company.” –Adam Brett, Company Director, Fullwell Mill Ltd

“Quality of products enables our small team to develop and support a complex application quickly and efficiently.”

How can you learn Delphi?

If you’re brand new to app development, or just new to the programming language, you can access a range of resources to kick start your Delphi development on LearnDelphi.org.

How can you buy/use Delphi?

If you need a licence or want some advice on which edition you should use (Community, Professional, Enterprise or Architect) and for great pricing, please contact Grey Matter’s Embarcadero licensing specialists by calling +44 (0) 1364 655123 or email: embarcadero@greymatter.com. Grey Matter is proud to be an Embarcadero Master Reseller for UK and Ireland. Alternatively, purchase your licence(s) in a matter of clicks on our webshop.